Assembling a 3D Printer - The Original Prusa i3 MK3

For a while, I was thinking about getting a 3D Printer. Not only because of the usability in regards to my other electronics and home automation projects, but also because of the fascination with this kind of technology to build something yourself. 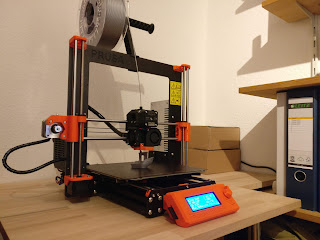 The Original Prusa i3 MK3

After lots of reading and gathering information from YouTube and other sources, a decision has been made towards an Original Prusa i3 MK3. Surely, it is not the cheapest printer around, but one with a great reputation and a company with lots of experience in this regards.

As I wanted to get the structured print surface, I had to wait a bit for the printer but that's fine. Also, I decided towards the kit instead of the fully assembled one as it's cheaper on the one side and I am also interested in assembling it my self to get to know the components and parts better.

All in all, the printer did cost about 750 € but a bit more in total as I had to add some filament to the order, of course.

As to see in this picture, we also build a small table for the printer to be placed on.

First off, the package contained lots of small packages.

And yes, that Haribo Gummibärchen package was included as well. In fact, there is a dedicated step in the assembly guide that tells you to treat yourself with some Gummibärchen. ;)

Also, it's been lots of packages and the printer had to be assembled screw by screw from bottom to top, it's not been that hard. The manual is extremely detailed and gives great step by step instructions. It is also available in multiple languages (online) and the pictures are a great help.

Furthermore, the assembly is split into several steps and the part for each step are packed individually and labeled.

So we (my wife, Melanie, and me) started to build up the printer.

Slowly but steady we build up the printer.

And step by step it became more and more a printer ...

The whole assembly took us about 8 to 9 hours. We took our time and read the guide very carefully as this has been the first printer we build up.

Of course, as soon as you get a 3D Printer, you want to print some funny stuff. The first print was the Benchy, that was on the included SD-Card.

And of course, the ball-bearing, which is printed in one piece but still moves ...

The quality we got right away did astonish me. Honestly, I did not expect that.

Next step was to get some funny models of thingiverse.com and myminifactory.com.

Oh and some SD-Card holders of course. Those are especially popular in our office as we have to deal with quite some SD-Cards for our daily business.

The first question we usually get when someone gets to know that we own a 3D Printer now:
"What is it used for?"
So apart from the fun stuff, like little toys or even the headphone stand and SD-Card holder, we use the printer for our electronic projects and home automation.

So I started to design my own objects in a 3D cad program to match our needs.

In our kitchen, we wanted to place some light below the hanging cabinet go provide some light with a neat animation.

The case for the Arduino nano I found online and just printed it.

But for the button, we needed a more customized solution. So I designed a model in Onshape for the first time.

I exported the file, sliced it and printed it.

I was surprised how well it turned out and it fits our needs perfectly.

Of course, with a new toy, new challenges appear. For example, I had to store some SD-Cards now that I could work with. Also, I had to store the filament spools now, build a roll construction for one spool that was a lot larger and heavier than the others and create a custom filament guide system for it as well ...

To store the spools of filament I was using the shelf bracket model by 3DPN that I had seen on his YouTube channel.

The printer was not cheap by no means. But it is fun and lots of new things to learn. The technology itself is very interesting and I see a big impact in the future when printers or replicators become a normal part of everyone's life.
Also, the printer enables us already to find different solutions for our DIY projects and enables us to think different, more creative.
Not only a gadget, but a great educational tool as well to embrace new technology.
More projects around or including the printer coming soon, for sure.
Posted by jendit