I am using an Android Wear smartwatch since it became available in Germany so here is my recap after a bit over two years.

About two years back I bought my first, and so far only, smartwatch, the Moto 360 (see my initial review of the Moto 360 here). It was right after the first smartwatches became available in Germany, about half a year after they had been released in the US.

The watch after two years

In terms of the hardware, not much has changed. I swapped out the band from the leather towards a silicon band (as leather tends to start smelling fast when you are sweating a bit more) and swapped it again to a Chinese manufactured third party metal band for around 12,- € a few weeks later. This metal band I am using now since about 1,5 years constantly without any issues, really great quality for this low price.

The watch itself shows basically no signs of usage at all (apart from the usual dust in the slots. No scratches at the glas at all that I could see and I never used any kind of protection for it. Actually as often as I banged the watch glas at a corner or door I was expecting it to shutter long ago ... so thumbs up ;-)

But there was one issue of aging with the watch, the battery.

After nearly two years the watch started to restart itself more and more ... in the end about 2 to 10 times a day.

I tried to set it back to factory settings and start over again but even within this process the watch startet itself several times.
After some research I got to the assumption that it might be a battery issue.

As it was short before the two years anniversary when I bought it I still got warranty on it. So I contacted the Motorola support and they gave me an address to sent it to.

After two weeks I got it back with the hint, that the issue has been solved by switching out parts (the battery I guess).

Now, with the assumable new battery, I saw myself surprised quite a lot because the battery duration has been increased by a drastic amount. Even further than it ever had been with the original battery so I would assume, it got the battery of the newer model, the second generation Moto 360 in it now.

Before the change the battery did last for about 14 hours if I was lucky. When the watch was new, I got around 16 to 18 hours out of it. After the change the watch still is at about 40% when I put it back on the charger after 18 hours of normal usage.

This means, the change of the battery might have given my watch an additional life of probably two years ;-)

I still use the watch every day and really missed it when it was sent to the repair.

My usage of the watch over a normal day:

The watchface I am using mostly

Actually I use the watchface Minimal & Elegant exclusively. It has thousands of different themes build in or usable by a huge community behind it. It's also possible to create watchfaces yourself with the huge amount of settings available. 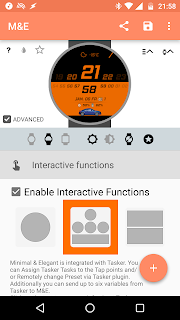 But the major feature for me is something that will come with Android Wear 2.0 in general, the option to assign different tasks, apps, actions to some parts of the display called interactive functions. So I use this functions to start my podcasts at the Pocket Casts app, run a task at Tasker, show my agenda or many more.

I know, many who used a smartwatch stopped using it at some point again.
Of course, I can only speak for myself, but I still really like using mine and I missed it a lot when I had to sent it back to repair.
To me the smartwatch still is a very useful extension to my smartphone that I don't want to miss. If it would had happend that mine was not to repair, I would have gotten a new one for sure.