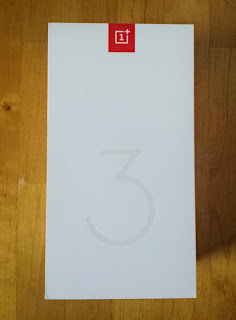 What is OnePlus and what's the 3T?

OnePlus is a relatively jung company within the smartphone brands. The Chinese company was founded in 2013. Their slogan "Never Settle" just means never to be satisfied with what was achieved.
The first smartphones where only available by an invitation system like I mentioned before.
Starting with the OnePlus 3 the smartphones became available by normal ordering process without invitations required.

What did I get?

There is a 64 GB and a 128 GB version available, which matters especially as there no option to extend the storage by SD cards. When I ordered I still went for the smaller one, only 64 GB, as I never really had any issues with my MotoX Play with it's 32 GB before and that's with about 200 apps, including some games and some GB of music, photos and videos on the device as well. In fact, by the time writing this article and having used the smartphone for a few weeks (months) now, installed all apps I usually need and downloaded lots of music to the device, I am at about 25 GB used storage in total.

I also ordered a shell case as I like to give my smartphones at least a minimum of protection and usually it gives the smartphones a bit more grip as well.

The smartphone package included the smartphone itself, the OnePlus Dash charger with a fancy red USB cable, some documentation and the SIM tray remove tool.

What about the hardware and how is the quality?

The OnePlus 3T is build of aluminium with Gorilla Glass 4 at the front. The lens of the camera at the back is covered by a Sapphire crystal lens cover. All in all the smartphone has a very valuable feeling. It is pretty thin but yes, it still has a headphone jack ;-)


At the bottom of the front there is a finger print sensor that also works as home button. Left and right of it are sensor buttons, which can replace the Android typical onscreen buttons if you like to (I do). You can even switch the side buttons to match Samsung's habits with the back button to the right if you want to (not for me).


And then there is the charging port, which uses an USB C connector instead of the still common micro USB. Together with the Dash Charger the OnePlus 3T charges from nearly zero to full in a bit more than one hour from what I have seen so far. Still, most of the time I charge the phone slowly over night at my nightstand.

Before I forget to mention, the display is a optic AMOLED  display which is crystal clear and very bright with great colors.

Concerning the battery life after a few weeks of usage now, it's more than fine for me.
I usually pull the device off power at about 05:30 in the morning and when I put it back on the charger at about 22:30 to 23:00 in the night, the smartphone still has around 30% power left. I am using the smartphone for reading news, listening to music and podcasts, connecting several Bluetooth devices, using it for navigation sometimes or even as a mobile hotspot now and then and playing some games as well ... oh and doing some phone calls of course.

I will not go to deep into any further specs, just want to mention that it also has quite some RAM with 6 GB.
If you want to know more about the detailed specs, check out the specs section at the OnePlus webpage.

The case I ordered has this carbon look. It fits very well and doesn't add much to the phones size. Of course I know it will not provide the same protection as a full bumper case but that's fine.

In terms of camera the OnePlus 3T is equipped with a 16 MP sensor. The camera app itself offers the usual automatic mode along with panorama and other settings as well off course.

There is also a manual mode, which still is kinda uncommon even if more and more devices support this feature. For photo enthusiasts it's a great way to even more manipulate and adjust or let's say control the picture they take.

But even in automatic mode the camera does a very solid job for what I could test it so far.

The front facing camera also surprises with uncommon specs in terms of another 16 MP sensor. Of course, this is great for selfies and even enables video calls in HD quality.

OnePlus is using OxygenOS as operation system, an Android Derivate that is very light weight but still has many additional features over vanilla Android. OxygenOS in it's current version is based on Android 7.0, which means features like split screen are available as well.
In fact, I already got the update to Android 7.1.1.

Like I mentioned before, you can customize the button layout for the default Android navigation to use either onscreen or the sensor keys. Also the position of back and app stack can be switched.
But not enough, you can also customize more features to the sensor buttons by assigning functions to the double or long press for each of them.

The status bar and the quick menu can be customized as well, of course.

There are also lots of options to set up some gestures to enhance your Android experience even more. Most of them are even made to be used when the screen is off (locked) like play/pause music, skip to the next title, light on the flash as a flashlight, open the camera either bei gesture or double tap at the power button and so on.

And there is even a dark theme as you see at my screenshots (I really like the dark themes) where you also can set the accent color.

So this is a smartphone with high end specs that can compete with other flagships easy for about 429,- €. In my opinion a fair price for what you get.
I am happy I got it and so far I am extremely satisfied with that smartphone. It has a very premium feel to it and with the customization an enthusiast like me has lots's of room to adjust it to the personal preferences.
I use a different launcher on it as usually (the Action Launcher 3) but that's because of my preferences and not because of a bad launcher delivered with it. The Action Launcher just adds even more gestures for faster access to my favorite apps and function.
All in all, the OnePlus 3T is an absolute great phone and the perfect successor to Google's canceled Nexus line.
Posted by jendit