This will be the start of my personal journey to switch from a German keyboard layout towards an English version. Let's call it an experiment ;-) 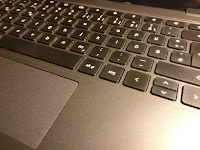 First of all: Why do I want to do this?

Well, I want to buy a Samsung Chromebook Pro soon (when it will be released) but Chromebooks are not that commonly available in Germany anymore and especially this one won't be. That means I will have to import one from the US with an US (EN) keyboard of course.
Sure I can change the keyboard setting to DE but I also wanted to take this opportunity as the EN keyboard layout got some benefits especially for programming as the brackets like {} and [] are easier accessible. I also want to see the special characters printed on the keyboard the way I can access and type them, especially for password inputs and so on.

Where did I start?

I learned typing at a regular German keyboard (with 10 fingers, means I can type without looking at the keyboard) about 25 years ago (yes, I am old ;-) ). Actually I started to learn typing at a mechanical typewriter (old … ancient I mean).
It’s been a long time I used this layout to type and I got used to it a lot.

On the other side I used an US keyboard layout for some time already when I was playing my first MMORPG (EverQuest) as the game did not support other keyboard layouts than US back then but I did not go much further into using it other than the switch of y and z.

Let’s take a look at the two keyboard layouts in detail.

First let's take a look at the German layout that I am used to.


The main characteristic is the QWERTZ layout, that differs from the US/EN QWERTY. This is also the main difference everyone thinks of first.
But more than that, we use some special characters like ä, ü, ö and ß … and we use this a lot.

Check out the US keyboard layout in comparison.


Another main difference between the two layouts is that at the German (and international) keyboards the right Alt key is called Alt Gr and actually has a different function. It allows to access additional symbols and characters, which some of (the once at the German layout) are shown at the first picture in blue. It’s easy to see that especially the different brackets [] {} are a bit complicated to reach from a 10 finger writing position.
On the other side, the special characters we use a lot (called "Umlaute" in German like ä, ü and ö as well as the special s ß) are missing completely at the US keyboard.

After taking a closer look I found another difference that made me wonder.
The US keyboard has one key at a different position and a different shaped ENTER key. The ENTER key itself is at a more horizontal shape for the US layout while it is more at a portrait style for the German keyboard. Also the physical button next to the bottom left of ENTER at the German keyboard switched position towards the top of the ENTER key at the US layout.
But even further, one key is missing completely, the one next to the left Shift key at the German keyboard. Don’t get me wrong, it’s functions are there (at different locations of course), just there is physically one key less at the US keyboard.

Other than that, a lot of the usual symbols and signs are located at different positions. The round brackets () for example are shifted one key towards the right coming from a German layout. Also other symbols like ", ?, -, _, +, = and many others are at very different locations.

So after all this differences, what’s the solution for me?
Well, I will try to get used to the EN keyboard layout, soon using a chromebook with an US keyboard.

There are two options for me to go with, maybe even a mixture of both.

First option; I can switch the keyboard layout from US to EN Int as this allows me to access all the special characters I need.
The EN Int layout looks basically the same as the US one, just the right Alt key is an Alt Gr key like at the German keyboard to allow accessing some international used special characters.

For example I can reach some of the special characters I need with the following combinations:
There is one downside of the EN Int keyboard compared to the US version. Some letters like >> ' << are typed instantly at the US layout (and the German layout by the way), but at the EN Int another button needs to be pressed before they appear like a space for example. It is because some special letters like >> é << can be produced this way by hitting the apostrophe and the letter afterwards.

Second option; I can just switch more often between different setups which I most likely will do, especially for writing longer texts in German. Switching between the two (or more) languages is done with one short key combination:

In order to do so the languages (keyboard layouts) to be switched between needs to be set up in the preferences before, then the key combination will toggle between them. An indicator in the status bar will show the currently selected language.

It will be an interesting experiment and I am wondering how it feels at programming. I also switched the layout at my old Chromebook and my Windows PC to test and practice already with the option to switch back fast for writing at a used setup.

I have written this article with the EN Int layout, with all it's symbols and special characters. I think it will become even better once I see the real keyboard in front of me because of the different locations of special characters.
But so far, it worked fine for me. ;-)