Recently I was telling you about my experiment to switch from a DE keyboard layout to an EN one. Not that much time has passed since then but I got some interesting experiences I wanted to share with you. 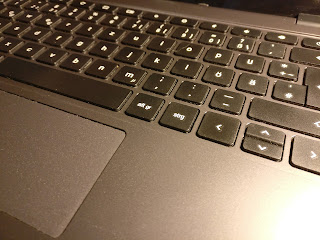 When I wrote about this experiment I was also mentioning the Samsung Chromebook Pro as major reason for this. As it plays out the release of the chromebook got delayed but regardless, I switched the keyboard layout I am using many times to experiment and get used to.

First I was using EN US for writing English texts like this blog articles or to do my programming and switching back to DE if I had to write German texts because of our special letters.
This has been done all by still having a physical German keyboard in front of me so I could not see the actual layout with special characters, brackets and so on ...

This method works quite fine and I was very happy with the EN US keyboard layout especially for programming. The brackets are a LOT easier to access while writing code compared to the German keyboard layout.

The downside of switching between the two keyboard layouts is that you will miss certain keys more often as some are just at different positions like Y and Z or at a slightly shifted position like the curved brackets at 8 & 9 at the DE layout vs 9 and 0 at the EN layout.

So I tried to use more the EN INT version.

The way to type our German special characters (Umlaute like ä, ö, ü and ß) at the EN Int keyboard by using the ALT Gr +  Q or Y or P key did not work out for me. Mostly because you have to press the ALT Gr key + a letter for two of this with the right hand. The cross usage, with ALT Gr with the right hand and Q with the left hand, works a lot better (to get an ä for example).

But I figured out another way to produce the German letters that I was not aware of before, the " key. At the EN Int keyboard the " and ' are not typed directly (like I mentioned in my previous article about the keyboard switch), rather are they on hold until you press another key. Pressing space after them will just produce the symbol, pressing ' followed by e will produce é for example.
What was not obvious to me at first is, it works the same way for the German letters:


It might seem a bit complicated at first, but it does not disturb the writing flow like the method with the ALT Gr.

Further on I also ordered an EN layout keyboard to visualize the change better but I am used to most of the special characters already as I used the EN layout a lot lately.

The US physical layout was a bit unused at first, especially the other shaped and positioned Enter key. After using it for a few days I found it more comfortable than the German version to be honest and I already miss it when I type at a German layout keyboard.

So I got used to the EN keyboard layout a lot faster than I thought. The EN INT keyboard layout is my layout of choice nowadays, regardless if I type German, English or do programming and also regardless of the physical keyboard I am using.
Of course, sometimes I still struggle and I might not type as fast at the EN layout yet but that will come by time. Especially typing German texts takes a bit longer with our special characters but it is fine for me and it will become faster by time.
I even got used enough to the EN keyboard layout that I use it for password inputs as well.
Also I really like the different shape of the Enter key layout at an EN physical keyboard a lot and I am looking forward to get a chromebook with EN keyboard layout as well.