At CES in January 2017, some interesting Chromebooks were presented. Especially the models by ASUS (the ASUS Chromebook Flip 2) and Samsung (the Samsung Chromebook Plus and it's big brother the Pro) been of interest to me. 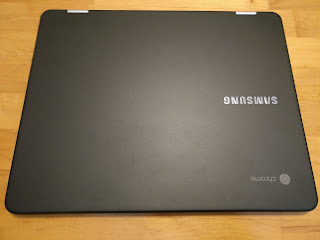 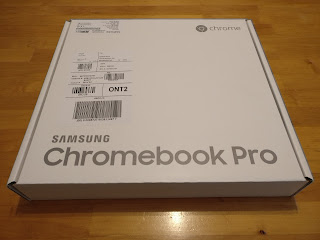 After the initial delay at it's release, it also wasn't clear if I would be able to get one that easy. Mainly because the current high end Chromebooks are not getting released in Germany, so I had to import it and hope for the best as the listing at Amazon.com did show "this item does not ship to Germany" for quite some time.
So after some waiting, Amazon was delivering the Chromebook to me. Also a huge plus to Amazon as they managed all the tax and custom office belongings. In addition, the delivery also has been faster than announced by about one week.

Finally, I got my hands on a Samsung Chromebook Pro.

I will not list all the specs here, if your interested in this details, please check out the official page about the Samsung Chromebook Pro.

Just a short word about what distinguishes the Pro and the Plus apart from their color.
The Plus is powered by an ARM processor while the Pro got an Intel Core m3. That's it basically.

At both sides, there are some connection ports.
A USB-C port at both sides that can be used to connect a monitor / projector, to charge the device (both USB-C ports work for that), to connect to an Ethernet cable or to older USB devices (with an adapter). 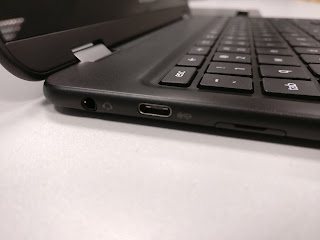 On the left side there is also a 3.5 mm headphone jack and a micro SD card slot. 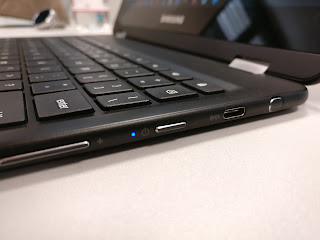 The right side also holds the pen (more on that later), the power button and a volume rocker as well as a status LED.

Actually I am using a USB-C hub at home as I run the Chromebook as my main driver for my education or private projects (basically everything but gaming). The hub enables to connect USB-A, USB-C, HDMI, Ethernet and power supply. This way I only have to connect one plug to get them all. 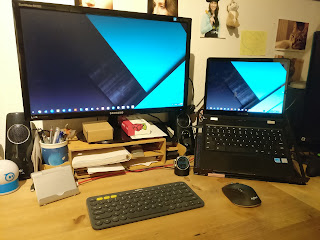 The picture above shows my setup at home with the Chromebook, connected to Ethernet, a large screen by HDMI, a Bluetooth mouse and keyboard and power supply.

The build quality is very nice. It is made of aluminium which makes it feel kinda premium. No question, a device build out of a solid block of aluminium instead of separate pieces screwed together might feel even more premium, but to me it's really fine, especially compared to the plastic one I had before. 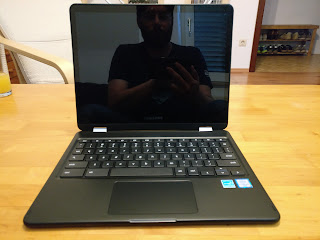 Also I did not recognize any inappropriate flex or loosening of screws after a few weeks of usage (like an other review mentioned).
The pro line comes with a mate black finish instead of the mat silver of the plus. I personally prefer the black look by far but they look both quite nice. :-)
All in all, a great feeling and looking device.

The screen has a crazy high resolution of 2400 x 1600 at a 3:2 aspect ratio, which is very uncommon nowadays (even as it's closer to the 4:3 ratio that has been more common ... a long time ago).
The effective resolution usable is more like 1200 x 800 or in my case 1350 x 900, depending on personal preferences. But what ever you pick there, the sharpness of that display is grandiose. 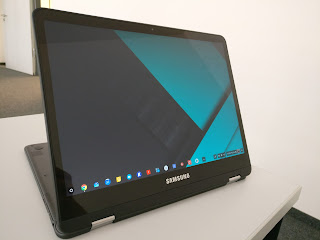 In my opinion, the 3:2 aspect ratio is a lot better for working than the common wide screens, who are optimized for watching movies or playing games. A bit more space in vertical direction really helps with productive work.

At my old chromebook I was used to a mate display which was ... lets say you could see something at it but it has been no pleasure. At the Samsung Chromebook Pro the screen is shiny instead of mate, which I was worried about at first as shiny screens tend to reflect a lot more. And of course, it is more reflective than a mate one. But it turned out not to be an issue at usual use cases as it is a extreme bright display as well which lets "outshine" most reflections.

The display really is the top star of that chromebook, for sure, very bright and extremely sharp. It is a pleasure to work at this display and often when I see it next to my big screen at home ... I wish the big one would be as sharp as well. 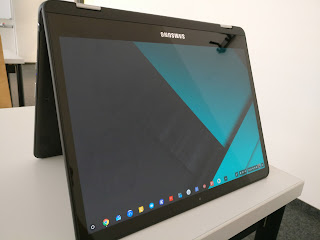 With modern chromebooks, the screen normally not only works as output but also as an input device. Screens of this high end chromebooks are touch screens today. The input by that works very well and I find myself more and more often touching other screens like my PC monitor at home when I want to close a window, press a button, scroll a page or whatever.

But not enough there, the screen also can rotate by 360 degree, basically converting the chromebook to a tablet. This mode is especially useful when working with the pen, which is included in this product as well. 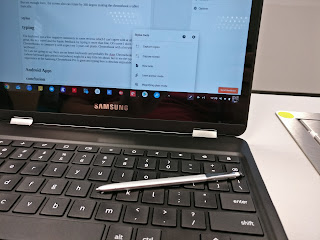 The pen is another unique selling point of this chromebook (and it's little brother the Plus). It is stored in the body of the chromebook similar to Samsung's Note line of smartphones.
When pulled out a menu opens to take screenshots (full screen or area) as well as taking notes (free hand), use the pen as a laser pointer or as a magnifying glass.

The pen itself is passive, means it has no battery build in. 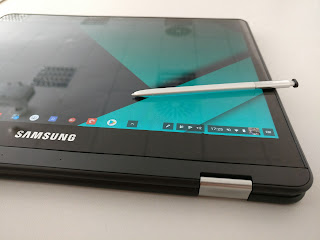 Using it for input is great, especially as you can use it in most apps like a regular pen while resting your hand at the screen. That is very important for comfortable pen input as holding your hand in the air all the time let it get tired fast. Also while resting, you can draw and write even better, very similar to writing at a sheet of paper with a regular pen.
This is also where the screen rotation comes in very handy when the device is used in tablet mode.

Expect more about the pen input in another article later on. 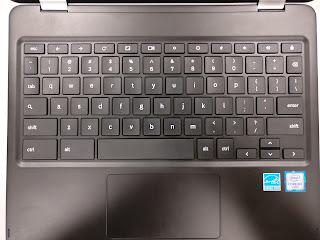 The keyboard got a few negative comments in some reviews which I can't agree with at all. It feels great, the key travel and the haptic feedback is more than fine. Of course, I don't have other chromebooks to compare it with expect my three years old plastic chromebook with a much worse keyboard ...

So I am not going to say there are no better keyboards and probably the ASUS Chromebook Flip 2 (whose keyboard gets blessed everywhere) might be a bit ahead, but to me the typing experience at the Samsung Chromebook Pro is great and absolute enjoyable.

On the downside for some, the keyboard has no back light. As this might be a bummer for some as the ASUS has back light to offer, but I don't care as I am not watching the keyboard while typing anyway. I am used to write with ten fingers without watching ... check out my article about the switch from DE to EN keyboard in preparation for my new chromebook.

Another point of criticism in some reviews was that the keyboard had to be cut a bit short compared to a normal layout because of the less wide screen size. Bug the only the outer keys at both sides got cut off a bit means the backspace, enter or tab key for example are a bit smaller than usually. Not really a big issue in my opinion. 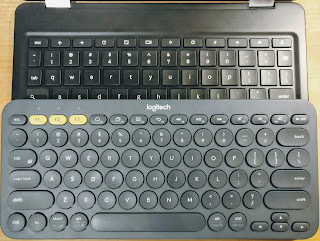 The big feature of course, advertised by Google about a year ago, is the opportunity to run Android apps at this Chromebook. 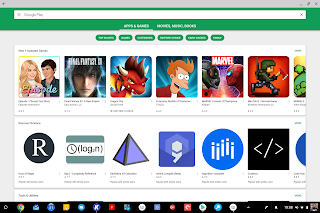 And indeed, Android apps can be installed and run at this device in stable channel (ChromeOS runs different channels, stable, beta and developer). Actually, I was surprised how well most of them work. Of course, not all apps run fine at the chromebook yet. And there is no real resizing of the apps as well. They run in original phone mode or full screen mode. Resizing might come with the support of Android 8, at the moment the chromebook runs with Android 7.1.1.

But what made me wonder was that the apps installed are the phone apps, not the tablet apps. For example, if a developer provides a phone version of his app and a tablet version to complement the larger screen mostly used in landscape instead of portrait mode, I would have expected the tablet version to be installed at the chromebook instead of their phone counterparts. Not really a big deal but made me wondering a bit. 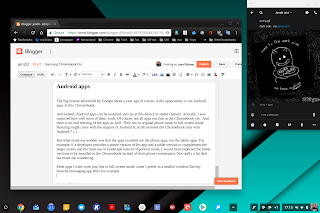 Most apps I tried work just fine in full screen mode, some I prefer in a smaller window like my favorite messaging app Wire for example.

Some apps work especially well in combination with the pen and the touch screen but more on that in another article.

The Samsung Chromebook Pro is a kinda expensive device especially for a chromebook (a bit over 600 € to me including import and tax) but it's a very solid device that is a pleasure to work with.
I enjoy it a lot and don't want to miss it. The keyboard for such a slim device is absolutely great and works perfectly for me.
The display is the real star of this device that makes reading, coding, writing or just surfing the web a pleasure. Especially with the 360 degree tablet mode and combined with the pen it's really easy to work with PDF documents as well, make notations or drawings or just to highlight some text. A really great feature for a student to work with in the lectures without carrying around tons of paper scripts.
For me, a great device that I would buy again, no question.