Like I mentioned before, combining 3D-printing and electronics is an exciting area. It gets even more exciting by adding another of my former hobbies ... photography. 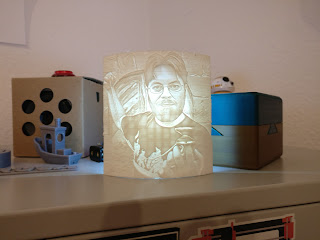 I found this by some YouTube videos about 3D printing. The possibility to make any image into a lithophane.

Lithophanes are images that are etched or molded into some kind of structure. This way a light source placed behind them (like a candle or window) will shine through at the thin parts more than at the thick parts. Because of the difference in material thickness and the structure of it, the images become a bit more of a 3D effect to them.
This technique is not new by any means. Lithophanes are known in Europe since around 1820.

In this picture, you see a lithophane without a light shining through so you can see the structures.


The next picture shows the effect of the same lithophane but with an enabled light source behind is so the light shines through.


How to create one yourself?

Well, that's actually quite easy. There is software rendering a normal image into a lithophane. For example, http://3dp.rocks/lithophane/ is a free web service that you can upload an image to and download the lithophane created out of it. There are several settings and even form factors to choose from, so pick one fitting to your needs.

The file downloaded is an stl file, that can be sliced and send to your 3D printer. When slicing this images for the printer, you should set infill to 100 % in order to avoid infill structures shining through and dar areas not becoming really dark. Also as this images should be printed standing for the best resolutions, I would highly recommend to use a brim.

As we wanted to give some as a gift to our family, there needed a way to not only hand an image they need to place at a window or put a candle behind it, I wanted something more finished.
At Thingiverse, I found a very nice lithophane case that works with batteries by rovimartinez.
There were a few not optimal things that I had to work around like the battery cover mechanic was not fitting completely, but nothing a file could not solve.

The case was made for the Outer Curve lithophanes at an aspect ratio of 570 x 520. After the first test prints, I was adjusting the images created by that ratio a little bit by adding one millimeter to its width, then the image was fitting perfect into the frame without light bleeding at the sides.

For the electronics, I was adding a flat LED, a switch and some metal plates and springs for the battery holder. The electronics have been ordered by Aliexpress, as usually :)

For the LED, two AA batteries have been enough so I decided to place a dummy in the third battery spot and add the battery plates and feathers to only two spots.

The lithophane boxes are very nice and made great gifts for our family.


By the way, thanks again Olha, a colleague of mine, for taking this nice pictures of my wife and me. :)

The combination of electronics and 3D printing was great and enabled us to create some fun and surprising Christmas gifts that you would not be able to buy at all.
Since I started 3D printing and electronics, I am creating more and more stuff my self ... more articles about that to come.
Posted by jendit