reactive desk light (to music or other sound) 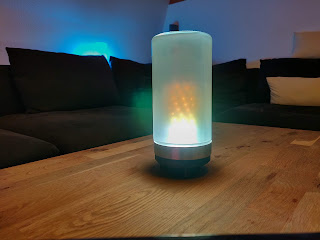 This project was inspired by Nerdforge, who did a YouTube video on that a while back.

What I took from the video

For this project, I got most parts like Nerdforge described in the video. An Arduino Nano (328 in my case), the same microphone as he used and some WS2812b LED strips. Also, a plastic pipe for the center to attach the LEDs on.

The code I used is also from him with some small adjustments.

Where the differences start

I used a different glass as I wanted it to be a bit milky all the way (including the bottom which will become the top of the light construction). I found some glasses fitting well at a local store, but it has been clear, not milky. This could be solved by some frost glass effect spray from Amazon.
Also very handy, the lid was a screw cover, which would make it very easy to open it up again to get access to all the electronics, but still be locked save enough to not get open by mistake.

So I had to create a different base for the project. This is where it became very interesting. I wanted to print a base so the pipe in the middle with the LEDs can be removed again. Also, the power socket should be locked in place securely with the power plug connected from the side to the whole construction. Also, the Arduino should be accessible as well as the mic needs to catch the surrounding sound.

To achieve this, I was designing a model of the power socket first. This would allow me later on, to do a boolean subtraction from the rest of the base. I was also saving it as a separate model to use it in other projects as well. You might have seen another use for this in my living room ambient light project.

I designed the base and subtracted the power socked from it. The base itself consists of two components, the base body, and the feet. I did two separate pieces here to get them easier to print. After printing, they just got glued together. This way, no support or bridging was required which gave me very precise prints where all the components just snug fit into.

As you can see, I printed two of them as I wanted to build two of these party lights (for our next office party :) ).

Next, the lid of the glass tubes needed to get a hole cut into them and glued/screwed on top of the base. Also, the electronic components needed to get soldered and put in place. I secured them with a bit of hot glue.

Now the only thing left to do was to glue the LEDs around the tube and connect them with the rest.

After putting everything together, the result was absolutely satisfying :)

All in all this project was fun and the result is great. It impresses me over and over again what you can do with a bit of creativity, some electronics, and a 3D printer. It's really a great combination.
This project did cost about 30 € for each lamp.
Posted by jendit