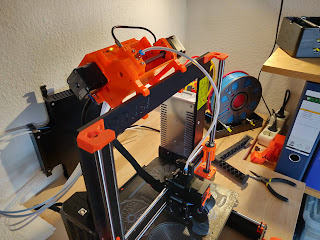 I was printing a lot since last summer and in January I ordered the MMU for my printer directly at Prusa. The order took some time, but finally, it arrived.

The MMU 2S is the Multi Material Upgrade 2S for the Prusa printers (in my case the i3 MK3).
It allows to use up to five different filaments in one layer. Previously, I could do some multi-color prints by switching the filament at layer changes. This also meant that I had to be present to do the manual swap.
The MMU now allows not only to swap filament on its own but also to use different filaments (colors or even structural different filaments) within each layer.

The upgrade comes as a kit, so I had to assemble it my self. Prusa also included the upgrade to the i3 MK3S in the bundle, which changes the construction around the hotend and the hotend fan position.
Therefore, the assembly started with the disassembly of the extruder to upgrade it. All in all, it took several hours, just for the extruder before even getting to the MMU unit itself.

Together I would say it took me even longer than the initial assembly of the Prusa printer last year. This might also be because the extruder took the longest time there as well and here it had to be disassembled and rebuild completely.

After the extruder had been done, the MMU unit got assembled. Here I did a small mistake by cracking the selector part as I used a little bit to much force at the screws. For now, I glued it, but I will print a spare part later, just to be on the save side if it cracks again.

The provided step by step guide was excellent, as usual. Just the German translation was not finished yet so I switched to the English one anyway.

Oh, and of course there was a package of Haribo Gummibären in the bundle as well. Even more, they got referenced in the manual quite often which always lets me smile.

Some of the steps were a bit confusing in the manual as it tries to handle all possible combinations like if you already have a Prusa i3 MK2.5 or a MK3 or a MK3S or ...
So sometimes it might happen to hit the wrong link for the next instructions or to miss a step for your own setup. Other than that, the guide was very detailed and accurate.

Another thing I don't like is the construction of the buffer at all. The buffer is the black box you can see behind my printer and it is used to store the filament that got retracted from the nozzle at a filament change. The idea behind it is good, just the execution is not.
It is extremely awkward to get the filament through it when you want to set up a new spool. Also, it requires a lot of space, which is very limited to my setup.

Therefore, I am printing an alternative solution right now to try out. I found this autorewind spool holder by VincentGroenhius and this wall mount for it by TheLightSpeed. Going to test this, if it works for me, I will mount five of this at the wall behind the printer.

The filament switch seems to work great so far. Of course, I did not even finish a print with it yet, but what is printing right now looks promising.
All in all the MMU2S seems to be a very fun and proper working option for multi color or even multi material printing. I am going to experiment a lot with this, for sure, so expect some more updates on MM prints soon.
Posted by jendit