Lately, I was telling about the assembly of my 3D Printer. In this article, I want to show off some of the models I printed since then. 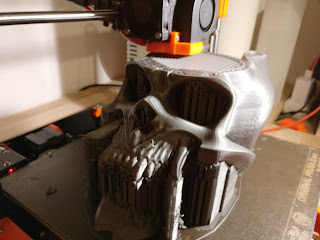 Where to find models to print?

First question, when you start with a 3D printer ... where to get the models from?
There are countless sources but I will list the three that have been the most value for me so far:


The first two are portals where people can upload their models and share them. Most of the models are free (but you can tip the designer). There are also options to put up models for money and a lot more portals like that as well.
Yeggi is not a portal for models itself, it is a search engine especially for 3D models.

Plenty of models are purely for decoration or fun, no question about that. So I printed some of this as well, of course.

I printed several little puzzles, some more simple, others a bit more complex constructions. Especially the Secret Butterfly Box is a fascinating device. A box with a hidden mechanism to unlock and open it. Be warned, the picture below shows parts of the secret so don't look to close if you don't want to get spoiled.

Some other models are pure decoration because they look good or bring back memories from childhood. Often models of objects that are very rare to get from merchandise or are extremely expensive.
My wife also did a magnificent job in painting some of this models.

Some models are even made for special material or get a special touch by it. For example, some small decorations that glow green in the dark ... which kid is not excited about stuff like that?


Models with a benefit

Off course, there are also models with some use to them.

There are several enhancements I did to my printing area. For example by the Master Spool that is used for the refill filament options at some vendors like Das Filament. Other enhancements are the drawers, that I made for below my printer table. The left one is used as a little trash container for filament snippets, the right one is used to store parts of larger prints until they are complete. Another little upgrade was an SD card holder for the printer SD cards. Not to forget the spool rolling system for the big 2kg filament spool ...

Cases for Raspberry Pi and Arduino are available as well of course.

Not to forget one of the most requested Items at work ... an SD card holder. Yes, it first sounds a bit odd, but in fact, we really need a lot of SD cards for the job we do but there are not really any good SD card holders to buy.

3D printing is fun and there is tons of stuff available to work with. Since I got the printer, it is running nearly 24/7 and there are so much more things I want to print ...
In a further article, I will tell you about the models I created my self and about the fascinating aspect of combining 3D printing with DIY electronics for both, decorative and useful applications. Also, the first picture of this post is some kind of teaser to that as well :).