Nvidia just released the new Shield. Other than last years model it's not a handheld gaming console, instead it's a tablet and additionally a controller without a build in display. 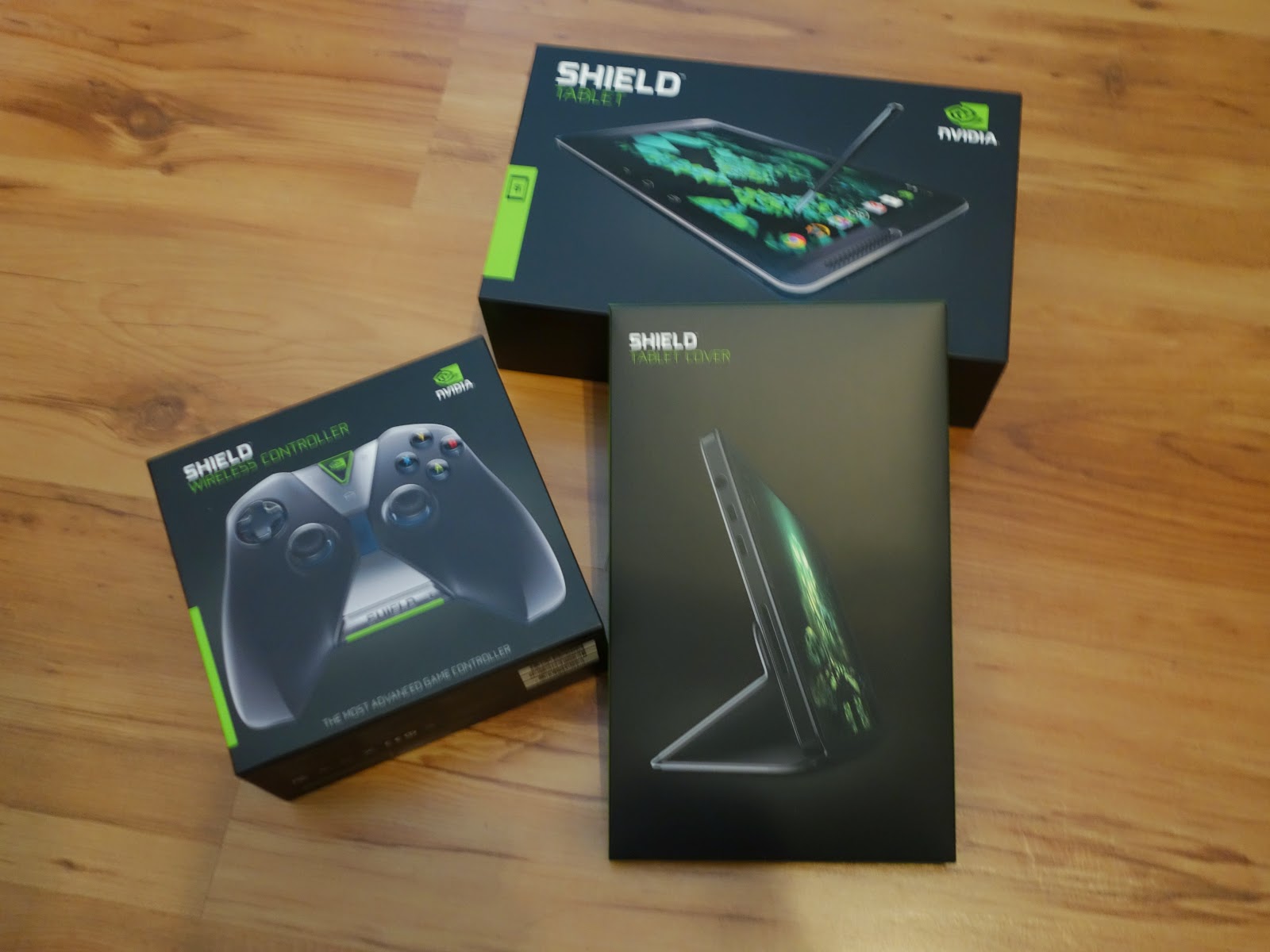 I ordered one (tablet, cover and controller) about a week before release and got it a few days after launch.
In this article I will talk about the hardware, the software and gaming experience will follow in another article very soon ;-)
By the way, as the tablet is called Nvidia Shield, the previous Shield now is called Shield Portable.

The most obvious characteristics of the Nvidia Shield Tablet are that the it measures 8 inches and has frontal speakers.

The version with WiFi only and 16 GB storage costs around 300 Euro, while the LTE version with 32 GB costs about 380 Euro.
I got the WiFi only model for my self and added a 64 GB micro SD card to it.

After unboxing, the tablet felt great with a soft touch back and a nice looking SHIELD logo on the back as well. The weight is good, not too light, actually it feels high class and well balanced in portrait and landscape mode.

The front speakers sound great, more than loud enough and clear. They still sound great even if you hold the device in your hands, covering some parts of the speakers.

Next the stylus attracts attention. It is placed in the tablet, locked in tight but can get out easily. The stylus itself is very thin but has a good weight. The tip is very thin but with an edge so thin and broad lines can be drawn easy.

After taking a closer look, there is a little point for criticism. The edges at the front along the display are a bit hard, maybe even sharp when touching with the finger on it.

Also the buttons for power and volume aren't very good to feel as they don't stick out so much and they also feel a bit soft in pressing without a good haptic feedback. So sometimes it's a bit hard to turn the tablet on or change volume by this buttons.

The operation system is android 4.4.2 with some very small changes from Nvidia. Basically just a few apps have been added as well as some settings specific for the Shield.

There are some additional apps to work with the stylus as well as apps for gaming. Further on there is one game included and preinstalled, Trine 2.

The cover is attached to the tablet by two pins and very strong magnets.
Also when the cover is closed or fully opened it will be kept in place by magnets as well as in the two positions at the back that help to use the cover as a stand for the tablet. This way there are three positions in which the tablet can "stand" on a flat surface or even on my knees.

When the cover is opened the tablet automatically wakes up while closing it sends it to sleep.

The inside of the cover is soft to protect the display while the outside is a bit harder.


The Nvidia Game Controller is a accessory every gamer should get along with the Shield Tablet. It sells for about 60 Euro.


Connected by WiFi instead of BT the controller has a way better connection to the tablet than most other BT controllers. This means less lag and delay and a way better gaming performance.

For playing together with friends, up to four controllers can be connected to a single Shield Tablet for some great multiplayer experience.

The build quality is great, the controller is well balanced and feels very good in the hands. All the buttons work as intended with a nice feedback on button press. The design is very similar to a Xbox controller, which is one of the best out there in my opinion.

In addition there is a touch panel in the middle, with a bit a strange design, but it works for those cases that needs to select something while not having the touchscreen next to you (e. g. when the tablet is lying next to the TV because of the HDMI connection).

The battery duration is quite fine and lasts for several days of playing.

On the top side between the shoulder buttons are a micro USB port to charge the controller and a headphone jack located. The great thing about this is, that when the tablet is connected to a TV a few meters away or standing in front of you but you want to play with a headphone, the cable only needs to reach to the controller in your hands.

The Nvidia Shield Tablet, it's cover and the Controller are great devices that work together fantastic. The build quality over all is grandiose.

The tablet alone would be worth buying already but together the controller make a great gaming experience which I will cover in another article soon.

This device was made for gaming and that is exactly what it feels like from the first minute. At the moment I think this is by far the best android tablet for this purpose at the market right now.

In my opinion a must have for every android gamer but also PC gamers might want to get it.

Find my article about the gaming experience with the Nvidia Shield Tablet (and controller) here: Nvidia Shield gaming and more
Posted by jendit